Radiation therapy, also sometimes known as radiotherapy is a treatment option that is usually performed after a lumpectomy. Your doctor may also recommend radiotherapy after a mastectomy if the tumor was greater than 5 cm and it had spread to the lymph nodes. The purpose of this treatment is to eliminate any cancer  cells that may have been left behind after the majority of affected breast tissues were removed. 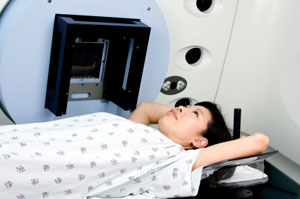